KetnetKick was a project financed by the flemish public television 'Ketnet' (branch of VRT). The audience targeted was 6 - 12 year old children. Due to it's success, Larian Studios had to provide several add-ons after its release in October 2004. During the second patch, I did some props. The style was very cartoony, low-poly with exagerated proportions and cheerful colours. 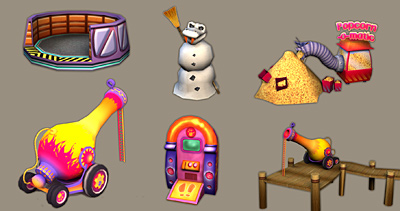